I knew the holidays would bring more siblings.

But nothing compares to the feeling I get each time a new email buzzes on my phone from 23andMe, AncestryDNA, and MyHeritage.

It’s that same feeling of excitement and fear of the unknown that you’d get from a first kiss. Can you remember that feeling? Your stomach does a somersault, the world around you fades away from view, and the only thing you see in front of you….

I was on my way to get Japanese with my husband and my brother-in-law when I saw this email. I remember exactly where we were on the road.

This was my first genetic sibling match since I found Griffin in May 2018. All of my previous siblings were found because of my match to Griffin, the Donor Sibling Registry, and finding out my biological father has three legal children of his own. This match makes sibling number 12. 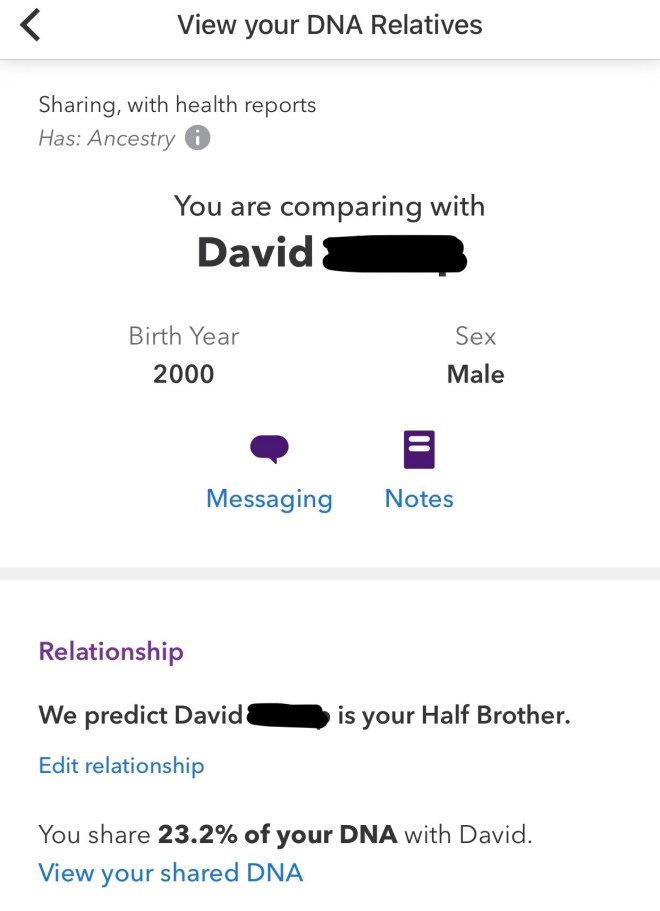 The first thing I do is message him and pray that he will respond soon.

Within 40 minutes, I had a new text message from a number I didn’t recognize. I opened it without hesitation.

My lips curled into a smile at reading the words, “your brother.”

First things first…did he know that he was donor conceived?? Does he have any more siblings?? 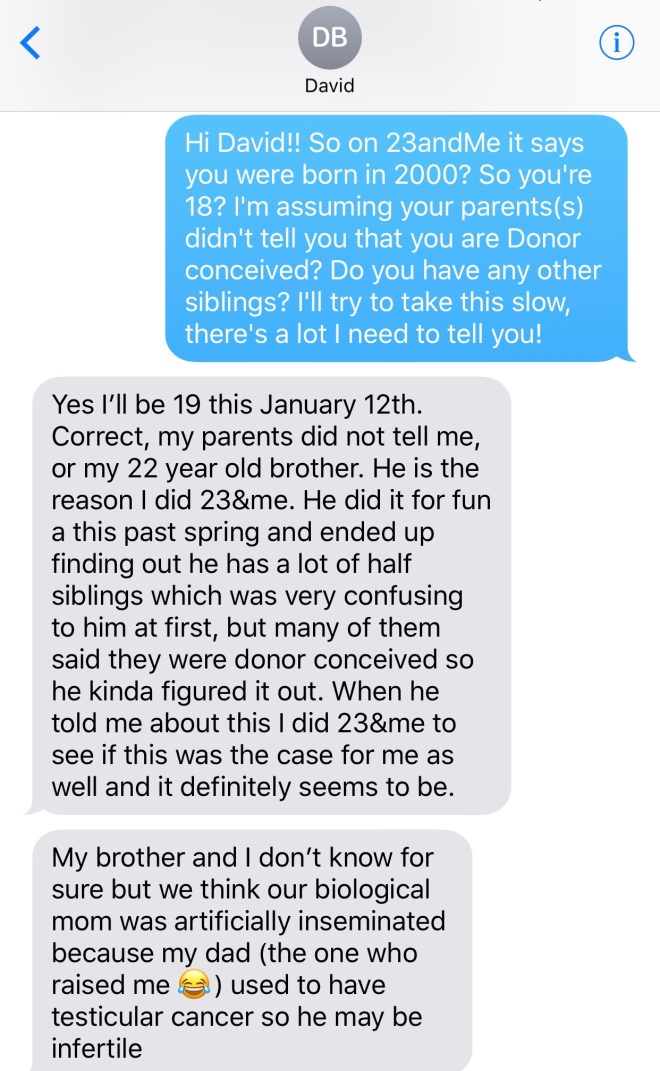 Thank goodness. He at least had an idea he could be donor conceived, so this is not TOO much of a shock. But…he has a brother. With a bunch of sibling matches. David and I are the only sibling matches on 23andMe. That means….the brother he was raised with, is not his full brother. Yikes. It’s painful to find out the man who raised you is not your biological father. To find out your sibling doesn’t share the same biological parents, adds salt to the wound.

We continued to chat. David confirmed his brother matched as a half-sibling. I told him that I found out I was donor conceived after matching with our brother Griffin on Ancestry, then mentioned how many of us there were. I sent him a list of all the current siblings names, ages, and whether they are willing to be contacted or not. I then remembered I should tell him that he’s an uncle.

Oops. Hopefully it wasn’t too soon for that.

We then realized our biological father and his brother have the same name. I guess that’s my husband’s middle name too, now that I think about it. That’s strange. 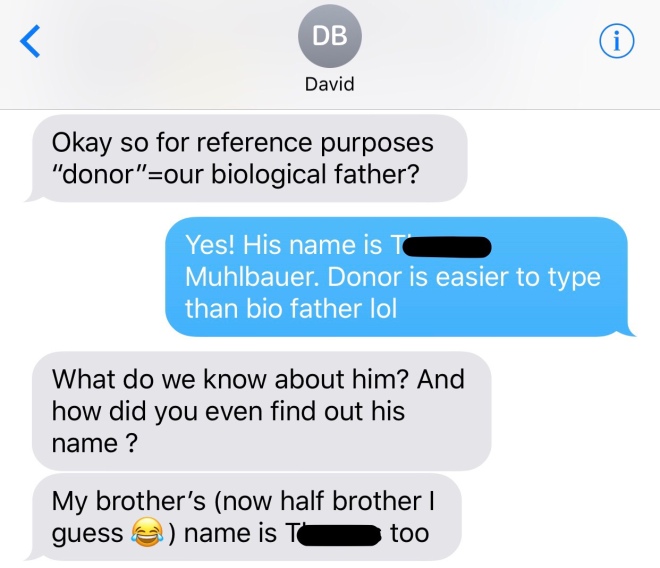 I sent David a link to this blog, hoping it would be an easier explanation than 3 miles of text messages. Finding our donor was a process.

At this point, I still didn’t know what David looked like. I tried to find him on Facebook, but he had a very common last name. So I asked where he lived to narrow it down.

Florida. Found him. I sent him a friend request.

He didn’t have very many pictures on Facebook. But you couldn’t deny we were related with a side-by-side.

We were both salutatorian in our high school class, too.

We continued to chat.

Sadly, some clinics do not give the option of using the same donor. David’s mothers clinic appeared to be one of them.

So David’s parents don’t know that he knows. He and his brother considered bringing it up on family vacation.

While I would probably say that’s a bad idea, no time is ever a good time to say, “Hey dad, I found out you’re not my biological father.”

David mentioned how different his dad was from himself, as well. This seems to be a running theme as a donor conceived adult. Our personalities and interests are not the result of nurture. Nature is a huge part of who we are.

Our conversation turned to more about ourselves and getting to know each other. Turns out he enjoys tennis- which is my sport of choice, and one of the donors listed “interests”.

He also struggled with migraines, which is highly hereditary. Nearly 50% of the donor’s offspring struggles with migraines. It will be interesting to see how many more siblings pop up with the same condition as time goes on.

Our conversation eventually died off. I mean…what more is there to talk about once you learn the basics about each other? We talked about our lives growing up, how we ended up where we are, what we are doing with our lives currently. I mentioned meeting up sometime, but he didn’t seem interested. I’m not offended. David is still young, and still processing this news. Maybe someday he will want to meet. Maybe not.

A few weeks after our conversation died, I decided to reach out. David mentioned he was going to talk to his parents over Christmas break…and I was curious if he followed through.

I know he didn’t forget.

You don’t forget that your dad is not your biological father.

But I don’t blame him for not bringing it up. It’s not an easy thing to do. Emotionally, it is hard. For all parties involved.

I wonder…maybe I would have done the same thing…had I found out on my own, instead of my mom revealing the truth.

I can’t even express my excitement of finding this new sibling to my family. My dad would be upset. My sister doesn’t care. My mom literally whispers to me about anything regarding my paternal family…like it’s a dirty secret she must protect. I have a photo collage of myself, with all my siblings. Reminds me of the Brady bunch title sequence…with all the family members in squares. And I’m supposed to hide it away from the world.

I wished my brother, David, a happy birthday on January 12th.

We have not spoken since.

I wish there was a handbook on how to manage new sibling relationships. This is uncharted water. I am the result of assisted reproduction. I would not be here today without the intervention of so many humans.

It’s easy to make a baby with science. But no one ever considered what these babies will be subjected to as adults.

There are no instructions for navigating the complicated relationships that result from being donor conceived.

I have the responsibility of keeping my true feelings to myself to keep my own family together.