With having 3 different Muhlbauer names on my matches, and an emailed response from Joyce of their relationship, I started a family tree.

A few days ago I made one for my mothers side of the family. I mostly focused on her maiden name and traced it back to the first person to immigrate to the states. AncestryDNA has a pretty big database, and can help you a lot if you have the name of a single deceased person. Once I input my grandfathers name, DOB & DOD, hints started popping up. Other users’ Ancestry trees pop up and it starts feeding yours. Public records of birth, death, and marriage are out there. I even found a copy of my aunts marriage license and a high school photo of my uncle.

Before I knew it, I was 6 generations deep and found that my 5th great grandma was cousins with Mark Twain (real name Samuel Clemens, author of Huckleberry fin & other classics). On my grandmothers side, I found where we are related to Gene Autry (American singer and actor. He was the original singer of Rudolf the Red Nose Reindeer).

That shit was wild. After learning the ins and outs of how to make a tree and how much the website helps you with hints, I made a tree for the Muhlbauers.

I started drawing it out. Based on her email, Joyce is the aunt of both M. and J. So I left blank spaces for their parents.

I decided to google J. Muhlbauers name. I figured he was decently young, & appeared to enjoy sports. Maybe he played sports in high school and his name was shared in the paper.

When I was young, I would google my name and it would pop up for my tennis stats and awards I had earned that were published in the newspaper.

I thought maybe I could get lucky.

I got a hit, but it was a hit for an obituary.

J. Muhlbauer was picked up on this obituary, because obituaries list the names of people “left behind”.

This was a huge find.

With the obituary, I now had the name of J’s dad, J’s grandpa, his aunts and uncles. The family tree grew in minutes. I then got a “hint” on a few of these family members since they were deceased. I started filling in family members left and right. 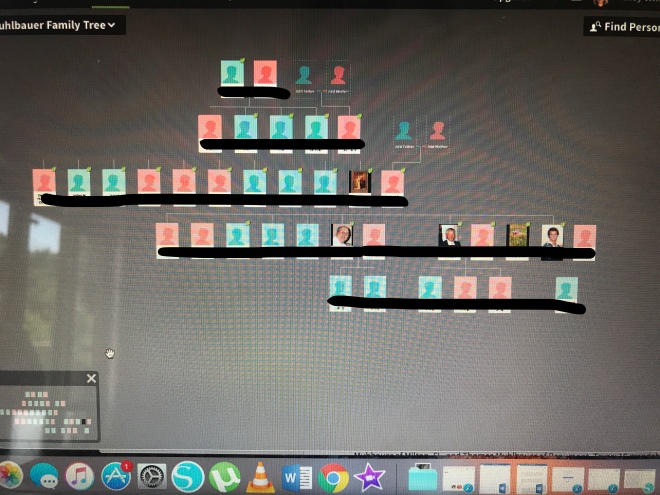 Some of them had photo “hints”. It was neat putting a face with a name. The tricky part about creating a blind family tree is that living people are anonymous. AncestryDNA will not give me names of anyone living.

My puzzle pieces were coming together.

Once I had J’s dad in place, Ancestry started building the branches. I found J’s grandpa, and that allowed me to fill in his sons (J’s aunts and uncles). I was able to appropriately place Joyce as his aunt according to ancestry records and her claimed relationship. Multiple uncles were deceased, including T. Muhlbauer. He died last year. Multiple obituaries helped me build and confirm this tree.

With knowledge that my ancestry match M. Muhlbauer is not my father (he would pop up as such on my DNA matches, according to the DNA Detectives FB page), the most likely relationship based on centimorgans (a type of measurement of DNA) is 1) half sibling or 2) uncle. Less common, but possible- 3) grandparent or 4) double cousin. If you don’t know what a double cousin is- no worries. I didn’t either. It’s when two siblings from one family marry two siblings from another family. When these people have kids, it creates a double cousin relationship. These cousins will have DNA similar to that of half siblings.

While working out this connection, I emailed Joyce back with my potential guesses. 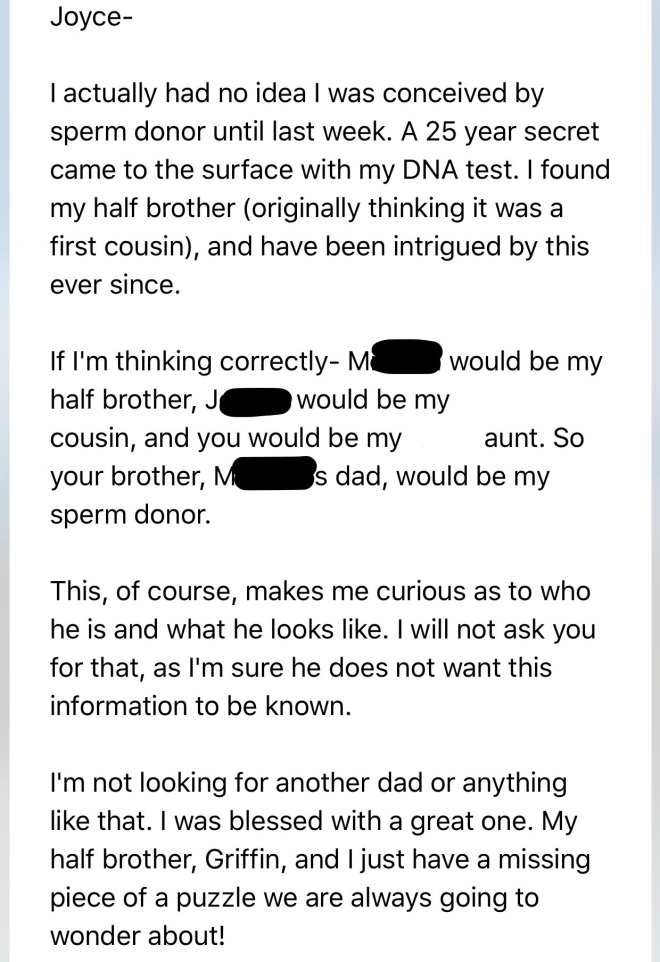 To figure out if M. Muhlbauer is my half sibling or uncle, I had to find more. Joyce emailed me back the next day. 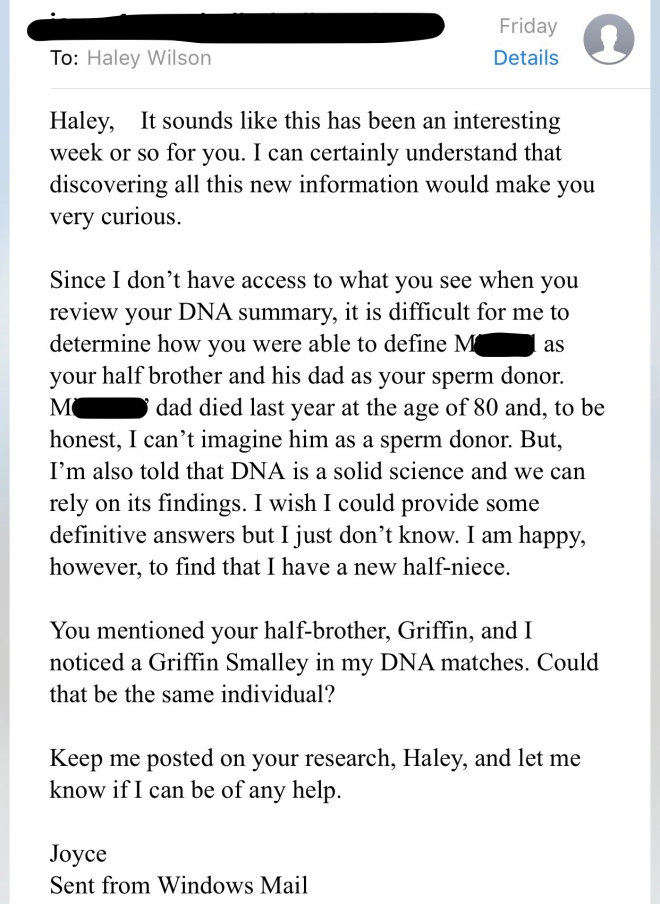 M. Muhlbauer’s dad died at age 80. That was a huge hint. I have the age of death for all of J. Muhlbauer’s uncles that have died. This pointed to T. Muhlbauer on the tree I created.

So now, I at least had a name to work with. He was 80 when he died last year. Could someone this old be my biological father?

First off- I needed to figure out T. Muhlbauer’s age at donation, if he ever donated. & IF he was my father, he is definitely dead. This almost gave me a feeling of relief. If my biological father is dead, then I won’t be itching to meet him…

I decided to do research on sperm banks and their commercialization to figure out if someone this old could be my biological father.

Well my sperm bank (Fairfax Cryobank), opened in 1984. IF T. Muhlbauer donated the very first year the bank was open, he would have been 47 years old (He died in 2017 at age 80, 80 minus 33 years is 47). With all things considered, IF the sperm bank followed their rules, he could not be my father. Donors are supposed to be 18-39 years old.

IF I can assume the bank followed procedure, T. Muhlbauer would not be my donor. Therefore, his son, M. Muhlbauer, could not be my half sibling. So that only leaves one option: M. Muhlbauer is my uncle. And THAT means his brother is my biological father. We’re getting somewhere.

So now I need to find the siblings of M. Muhlbauer. These people are likely all living…which makes finding them complicated. Ancestry won’t help you find living people for your tree.

M. Muhlbauer was not listed as his son. But Joyce told me he was.

I know from personal experience that obituaries only list names of people who the family “recognize” as family.

Assuming the obituary on T. Muhlbauer is correct, and Joyce is being honest, that leaves K. Muhlbauer and T. Muhlbauer Jr as my potential biological fathers….regardless of whether the family recognizes M. Muhlbauer as one of his sons.

I turned to Facebook again. I found K. Muhlbauer. 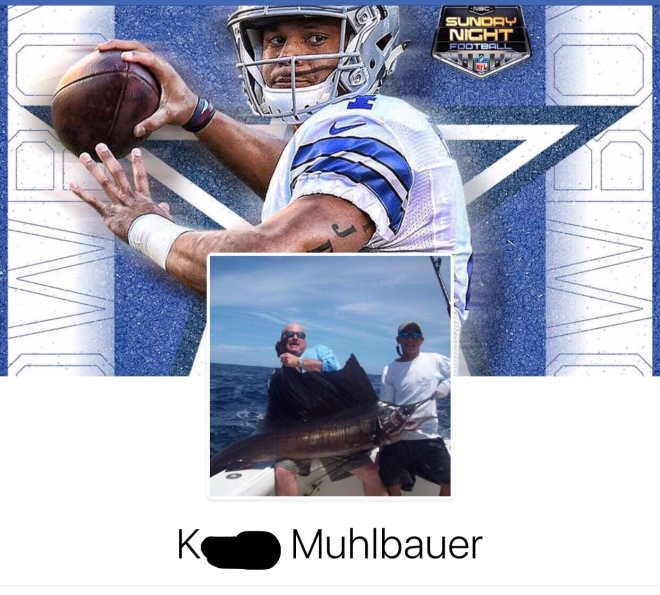 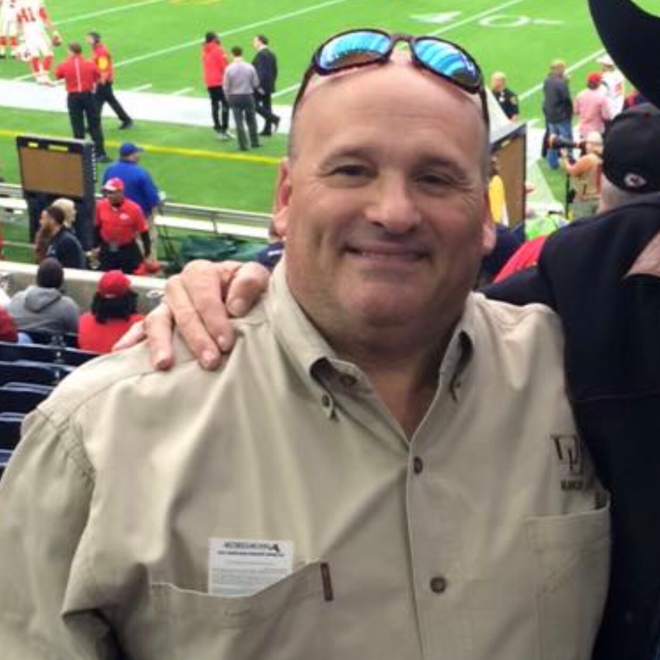 He has brown eyes. And what looks to be a family. His profile was pretty locked down, so I couldn’t see much. But he also works in marketing.

I could not find T. Muhlbauer Jr.

I have not heard back from Joyce yet.